Mickey Mouse Last Supper
One of several works by pop artist and culture jammer Ron English. This is one of my favourites as I like that the disciples are divided between Disney and Warner Bros. characters all looking to Mickey Mouse, the first cartoon superstar, as Jesus. What puts it to the top though is cartoon spokesperson Joe Camel as Judas. Nice.

Oops, made an error right on the first one, as has been pointed out by a few, including Drunken Chud: “Joe Camel is not Judas, he’s Peter. Pluto is Judas, notice the bag in his hand.”
Right you are, and it makes far more sense for Pluto to be Mickey’s Judas. And making a cigarette spokesman represent the future head of the church is a much harsher commentary.

Sopranos Last Supper
Famed celebrity photographer Annie Leibowitz captured The Sopranos Jesus Christ pose in 1999, with Tony as the central figure in this mob of disciples and his treacherous mother Livia as Judas. Who will take on that role as the series wraps up?

Simpsons Last Supper
Depicting Homer Simpson with his beer-swilling disciples at Moe’s is inspired, but my one complaint is how many minor characters there are in the bar, making some guy I don’t even recognize as Judas. The image comes from the end of Thank God It’s Doomsday. Superman’s Last Supper
Superman as the Christ figure is a no-brainer but my superhero knowledge is spotty so I can’t name a number of the disciples and I don’t know who Judas is. Anyone?

From Anonymous: “ACTUALLY – That is Mrs. Butterworth sitting in the Christ seat, not Aunt Jemima – Aunt Jemima is to Butterworth’s right in the St. John position.”

The Last Breakfast
The Last Breakfast was painted by Aubrey Hallis in 1996. Did Detzner copy him? It’s possible, but as evidenced by the collection here, copying The Last Supper is not a completely original concept. In any case, I like both of their ideas, mostly as sugar cereals have been more a part of my daily life than the Bible ever has. Cereal Mascot Last Supper
Another great Last Supper depiction by Ron English and lo and behold he places Cap’n Crunch as Judas as well. This leads me to believe two things: great minds think alike and people really hate the Cap’n. I don’t understand the bad rap – all he ever did was fight the evil Soggies. If anyone was ever going to sell you out it would be the Trix rabbit. He’d do anything for a bowl of that stuff. Sesame Street Last Supper
I accept Big Bird as the Saviour, but why would Cookie Monster betray him? I suppose it would be very easy to bribe him with cookies. Brought to you by the letters J and C.

Star Wars Last Supper
Eric Deschamps was commissioned to paint this by Giant magazine before the final Star Wars installment was released. From the painter: “They wanted selected Star Wars characters in the Last Supper. I started out staying really close to the poses in the actual last supper painting then ended up straying away from them a bit to make the wide range of characters fit.” I would have preferred to see Boba Fett as Judas instead of Han Solo or Chewbacca (I can’t tell who it’s supposed to be) but I suppose that is one of the difficulties when placing all the characters into a preset image.

From Billy: “Left to right: Q-Bert, one of the dinosaurs from Bubble Bobble, Centipede (from Centipede), the dog from Duck Hunt, Mario, Princess Peach/Toadstool, Donkey Kong, Luigi, I’m not sure what that red floating thing is at all, Link, Frogger, Bomberman, and Pacman. Under the table is a Ba-bomb.”

Update: Many, many people have pointed out the “red floating thing” is Dig Dug. Thanks all.

From Billy: “The game systems on the table are in front of their corresponding character, starting with The Atari 2600, and ending with the original Playstation. I wish I could identify them all, but alas, my vision isn’t that good. I do see though the Intellivision, (and probably Coleco Vision), the original NES, Super Nintendo, N64, Sega Genesis, Sega CD, Sega Megadrive, and what might be the Sega Gamegear. Can anyone else identify those others?”

Hollywood Last Super
You’d think there would be more versions of the Last Supper featuring Hollywood celebs as the apostles but this was one of the only ones I could find, featuring Marilyn Monroe in the Christ seat. She’s a great choice as she was sacrificed for fame and celebrity. Clark Gable is depicted as Judas but I don’t know why. Any guesses?

From shananashawna: “[The Misfits] was the last movie for [Clark Gable as Marilyn Monroe] and a lot of crap went on. Gable said Monroe nearly gave him a heart attack with all the trouble she caused and he did indeed have a heart attack shortly after and died. Maybe Monroe should be Gable’s Judas.” Yet another Ron English take on the final diner with an interesting yet peculiar selection of disciples for King Mickey, from Bart Simpson and teletubby Tinky Winky to Olive Oyl and Frankenstein. King Kong holds the Judas slot (and Marge Simpson). That 7o’s show Last Supper
A screengrab from an early episode of That 7o’s show called The Streaking. Not too badly done considering they only had six characters to work with. M.A.S.H. Last Supper
Back in the real 1970s, director Robert Altman shot a scene in his classic film M.A.S.H., showing he surgeons in a familiar pose. Ronald’s Last Supper
McDonalds is a popular target for Last Supper parodies. I suppose everyone imagines that the restaurants are so ubiquitous now that is likely where the the final meal would be held. The Last Happy Meal
The Last Happy Meal is more of a cartoonish of a take on da Vinci’s work, but the free toy is a great kicker. I also love the inclusion of some long discarded characters like Mac Tonight and Captain Crook. The Very Last Supper
One final take on the McDonalds theme with the interesting detail being Grimace depicted as Judas and not the Hamburglar, as most of the rest of the parodies used. It’s always the one you least suspect. In the detailed view you can see that Grimace is wearing a Burger King hat — his version of a bag of gold, I suppose. Titled The Very Last Supper, by Jim Thompson, it was painted on the back of a pizza box, which is a fitting touch.

James Wood’s Last Supper
This one I have no explanation for at all. A table filled with James Woods except for Robocop, from artist Brandon Bird. Sure, why not? Lego Last Supper
The last of the series isn’t so much a parody, I just really like Lego. Lego Brick Last Supper
I mentioned how much I like Lego, didn’t I? Here’s another version. 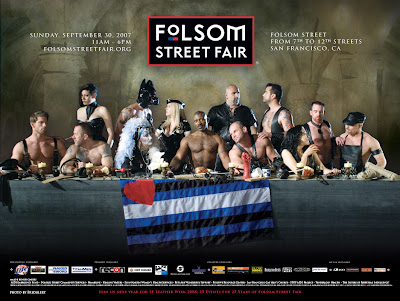 UPDATE: Since my first posting Last Supper parodies have hit the media cycle when a poster of Jesus and his disciples as “half-naked homosexual sadomasochists” sparked controversy at the Folsom Street Fair in San Francisco.

The parody showed the fetish-wearing disciples and a table covered in sex toys – much like you might suspect to see at an event that closes Leather Pride Week. The Catholic League and Concerned Women for America flipped out and pressured sponsor Miller Brewing to pull its logo from the poster. It’s ridiculous as there hasn’t been anywhere near the amount of controversy over the 21 parodies listed above.

You can read a full account of the incident and an excellent critique of the poster at Queering the Last Supper.

The upside of it all, at least for me, is that it revealed a few more versions of the Supper. Thanks to Dan Savage for the link and the large collection, both pop culture and otherwise. Popeye Last Supper
Artist *ATLbladerunner’s Popeye parody, titled Supper At Sea is described thusly: All of the characters are from the Thimble Theater strip by E.C. Segar, which later became just the Popeye comic strip. I tried to keep most of the characters in the same positions as the apostles are in Leonardo’s version, and tried to put in a few little fun things relating to the original. For instance, putting Olive in the same place as the apostle John, who some believe to be Mary Magdelene. I also had to put Brutus in the place of Judas Iscariot, and have him holding money (pieces of silver). Phish Last Supper
The Phinal Supper, featuring the members of Phish. I don’t know anything about the band other than I’m sure some of their followers feel like disciples. Go here for a further explanation. Sean Connery Last Supper
I found this one at You’re The Man Now Dog. It looks like Sean Connery is Christ and his Judas appears to be George W. Bush. I have no idea why. Some of his disciples are Batman, Bill Cosby, Conan O’Brien, Chewie and Patrick Stewart. I also think there is Harrison Ford as Indiana Jones, but I can’t be sure.

Seem the choices are not as haphazard as I’d assumed. From anonymous: “The characters are not chosen at random those are the most prevalent characters posted on YTMND.” House Last Supper
I don’t watch House (I’m not a big fan of medical shows, Scrubs being the exception) but this Season Four promotional figure is beautifully done. Set in an operating room with a patient for a table, it mimics da Vinci’s Last Supper perfectly. I’ll leave it to fans to explain who is Judas and why.

From hjm: “I don’t think anyone in the picture is supposed to be ‘Judas.’ Even though Dr. Chase sits at the right spot for it, him being ‘Judas’ would not make sense in a promotional picture for the fourth season in which he plays a minor role (if it were for one of the previous seasons, then yes, sure). Surely, this might change. However, if you look at the picture, you might consider it odd, showing only 11 ‘disciples’. Thus, it is most likely that the missing person is the one who could be considered ‘Judas’ in the fourth season (maybe ‘Cut-Throat Bitch’). As a promotional picture it would have been unwise to depict that ‘Judas’ and giving away a such important clue as to what the ‘Judas-character might be up to in the course of that season.” Tarantino Last Supper
I expect Quentin Tarantino really does see himself as a Christ-figure, surrounded by his blood-thirsty disciples. There’s a Last Supper that will end in a gunfight of biblical proportions. Artist David Laird went a little overboard with the number of characters, nor does the layout doesn’t make it simple to determine the Judas figure, but I would place my money on Bill. It’s nice that he puts The Bride by Tarantino’s side, in a nod to the theory that the figure to the left of Christ in the original painting is Mary Magdalene. iPhone Last Supper
The iPhone Supper is a nice riff on the ascendence of the iPhone, but it could have been so much better. How about a pink iPod Nano to the left of the Iphone and maybe a Zune in the Judas spot. But hey, I’m just the aggregator, not the artist.

Cookie Last Supper
The Last Snack, a photo by Tom Altany, was nominated for the International Color Award for color photography (Advertising category) in 2006. Not much to say about this other than it makes me hungry. Would His blood be chocolate milk?