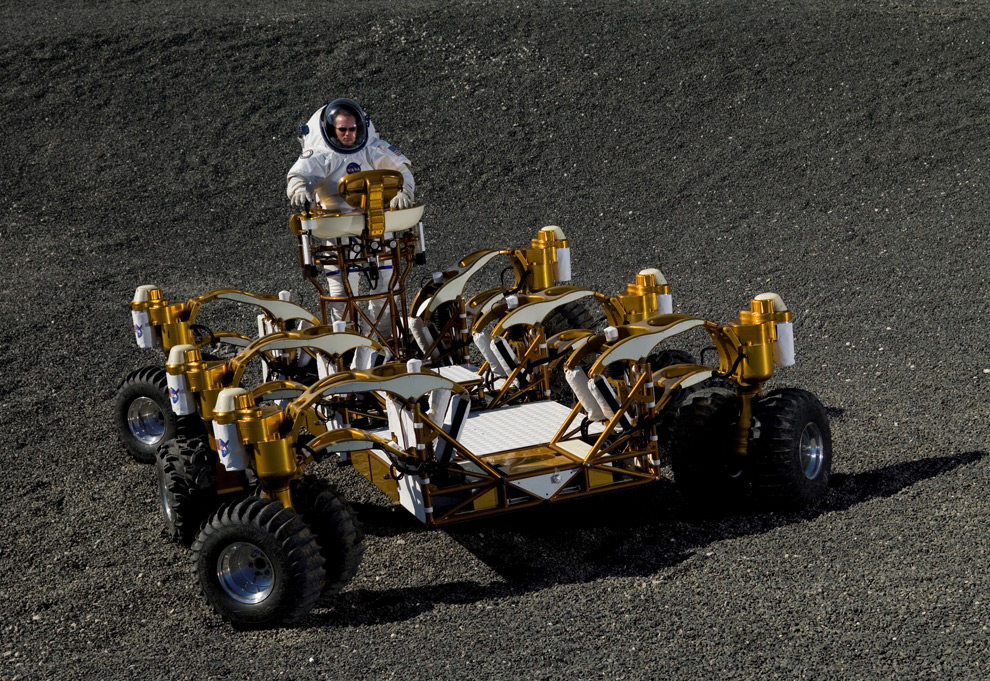 The lunar truck was built to make such off roading easy, with six wheels that can be steered independently in any direction.

In addition, the steering center can turn a full 360 degree, giving the driver a good view of what’s ahead, no matter which way the wheels are pointing. (NASA/JSC) 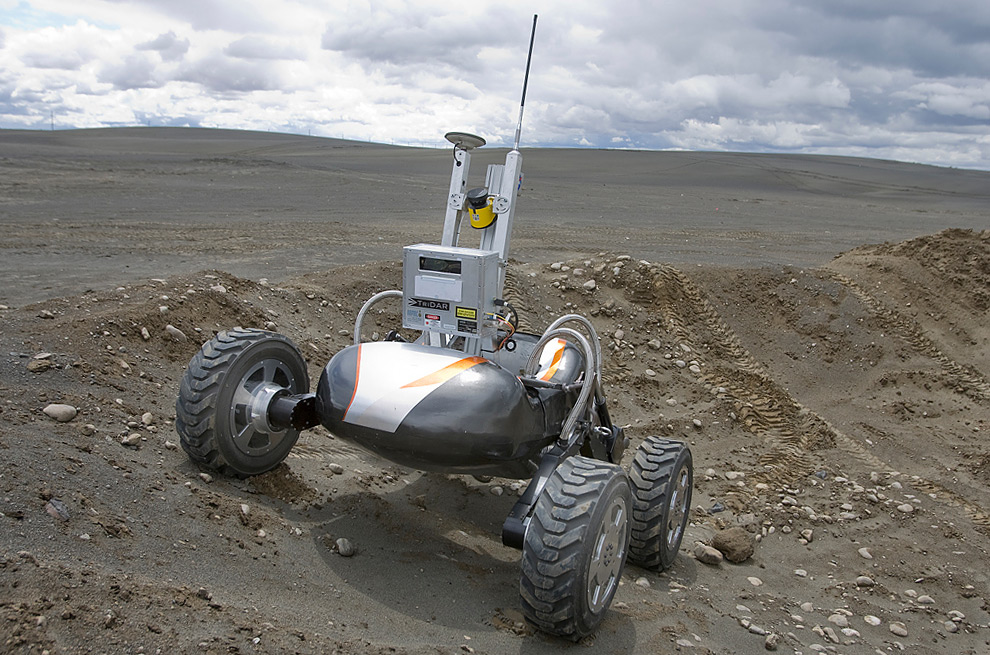 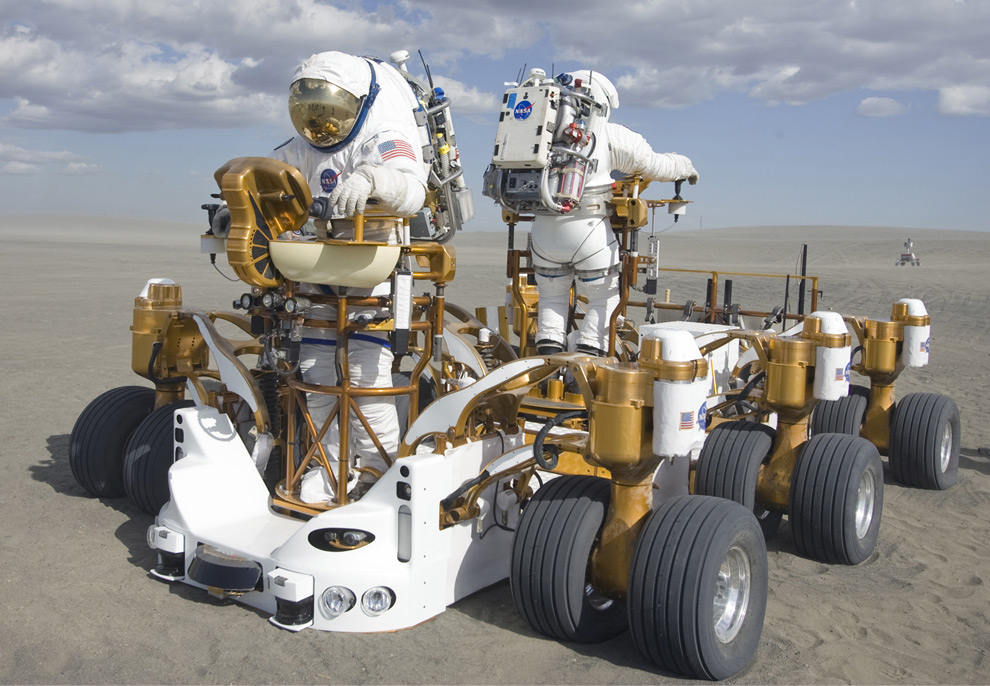 The Crew Mobility Chassis Prototype is NASA’s new concept for a lunar truck. Researchers were trying it out at Moses Lake, WA, as part of a series of tests of lunar surface concepts.

One feature is its high mobility.

Each set of wheels can pivot individually in any direction, giving the vehicle the ability to drive sideways, forward, backward and any direction in between — important if the truck becomes mired in lunar dust needs to zigzag down a steep crater wall or parallel park at its docking station. (NASA) 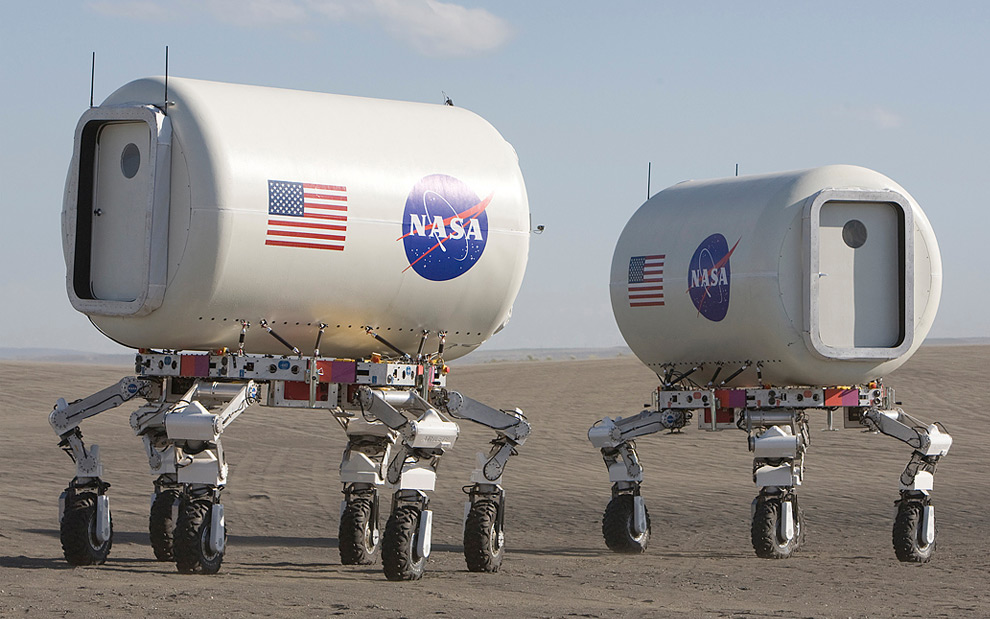 Athlete could be the RV of choice for future explorers. Its multi-wheeled dexterity could allow robots or humans to load, transport, manipulate and deposit payloads to essentially any desired site on the lunar surface. (NASA) 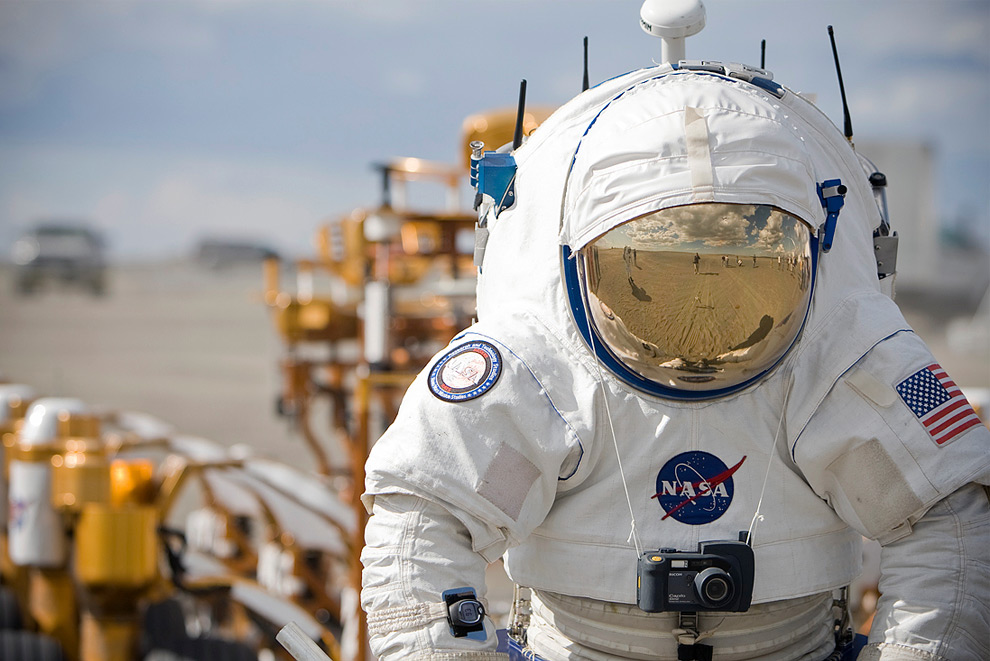 NASA’s lunar truck during field tests near Moses Lake, WA. Whatever direction the lunar truck is headed, the driver has a good view.

The astronauts’ perches can pivot 360 degrees.

The whole wehicle can be lowered to the ground for easy access in bulky spacesuits. (NASA)

The igniter was just over 36 inches tall and was the first time the newly developed igniter had been tested. Its purpose is to ignite the primary motor on the LAS that pulls the capsule away during an emergency on the pad or during launch. (NASA and Alliant Techsystems) 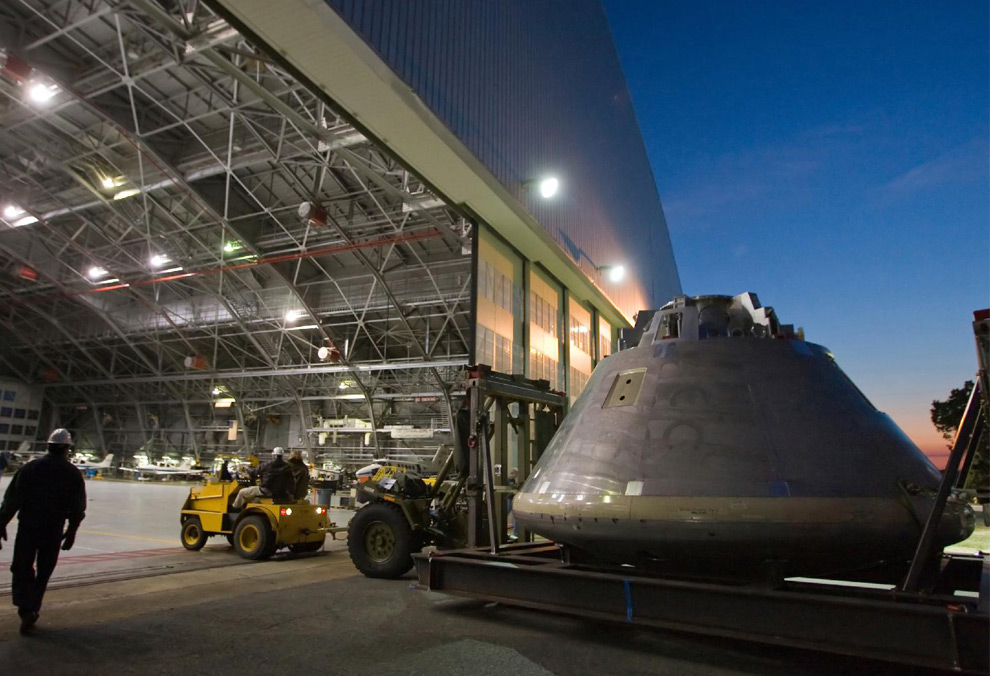 A mock-up of the NASA’s new Orion space capsule heads to its temporary home in a hangar at NASA’s Langley Research Center in Hampton, Va.

In late 2008, the full-size structural model will be jettisoned off a simulated launch pad at the U.S. Army’s White Sands Missile Range in New Mexico to test the spacecraft’s astronaut escape system, which will ensure a safe, reliable method of escape for astronauts in case of an emergency.

NASA’s Constellation program is building the Orion crew vehicle to carry humans to the International Space Station by 2015 and to the moon beginning in 2020. (NASA/Sean Smith) 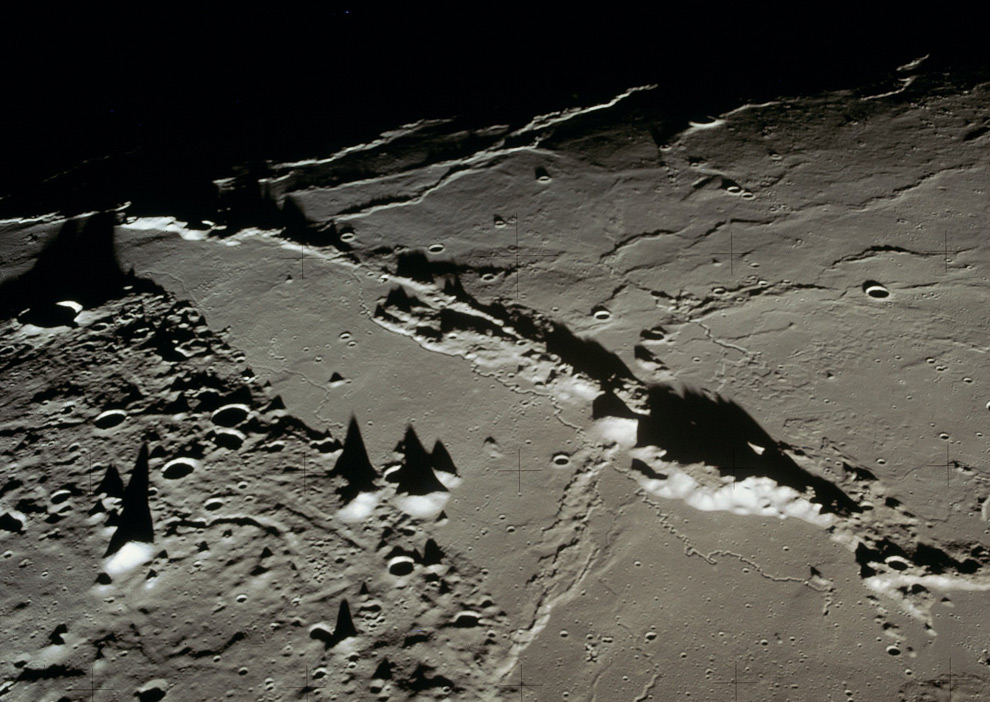 And Looking Back — A view of the Moon’s surface taken from lunar orbit in the summer of 1971. Apollo 15 was the ninth manned mission to the Moon. (NASA) 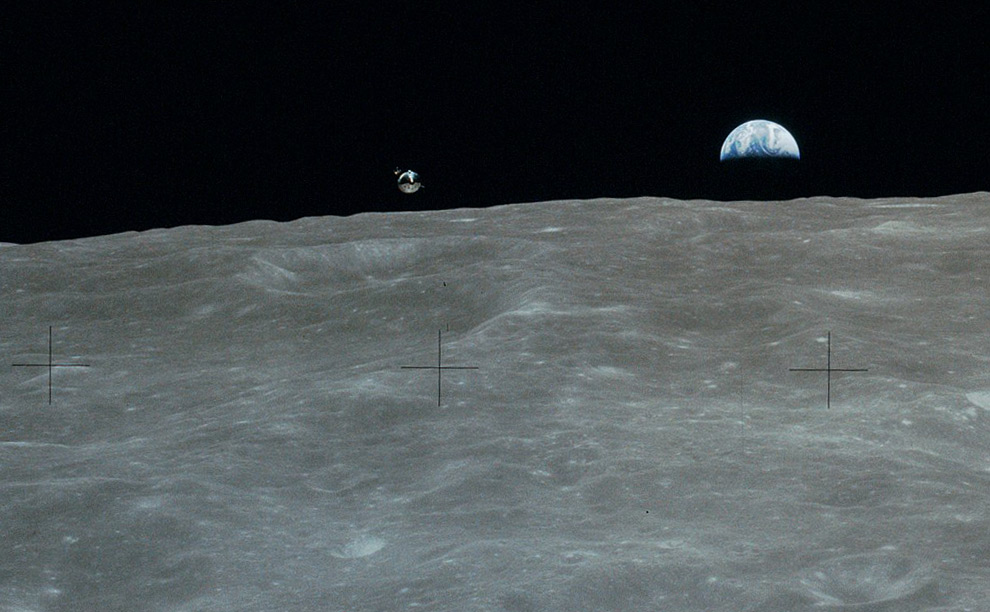 April 20, 1972 – Apollo 16. A view from the Landing Module, looking toward the Command and Service Module with Earth over the lunar horizon.

Astronauts John Young and Charles Duke took this shot as they piloted the LM down to the lunar surface. (NASA) 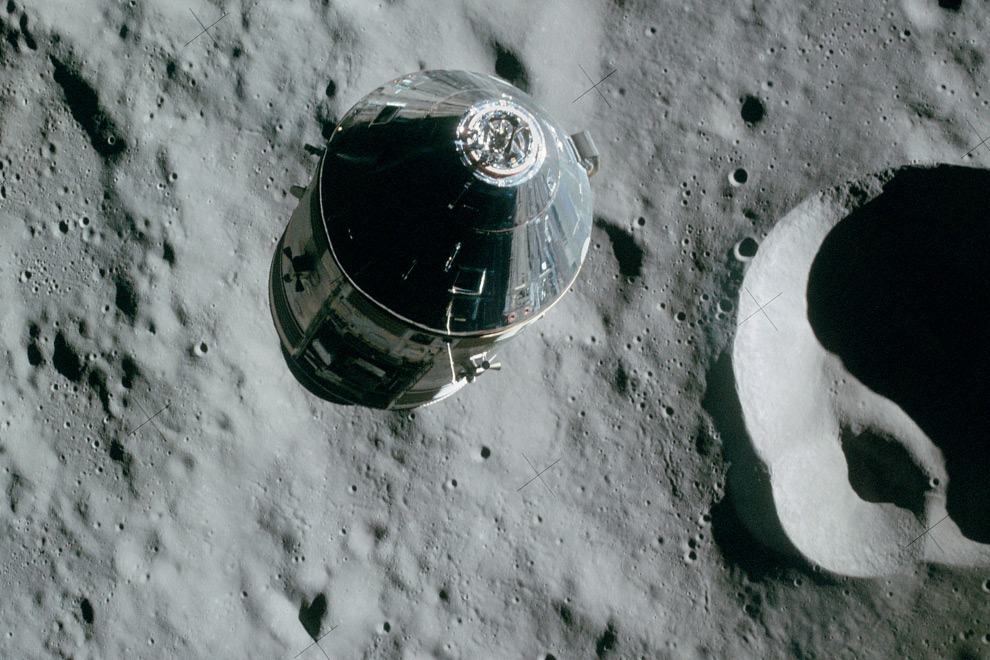 Astronaut Ken Mattingly stayed aboard the CSM while the LM went to the surface – orbiting over 60 times, and performing twenty-six separate scientific experiments. (NASA) 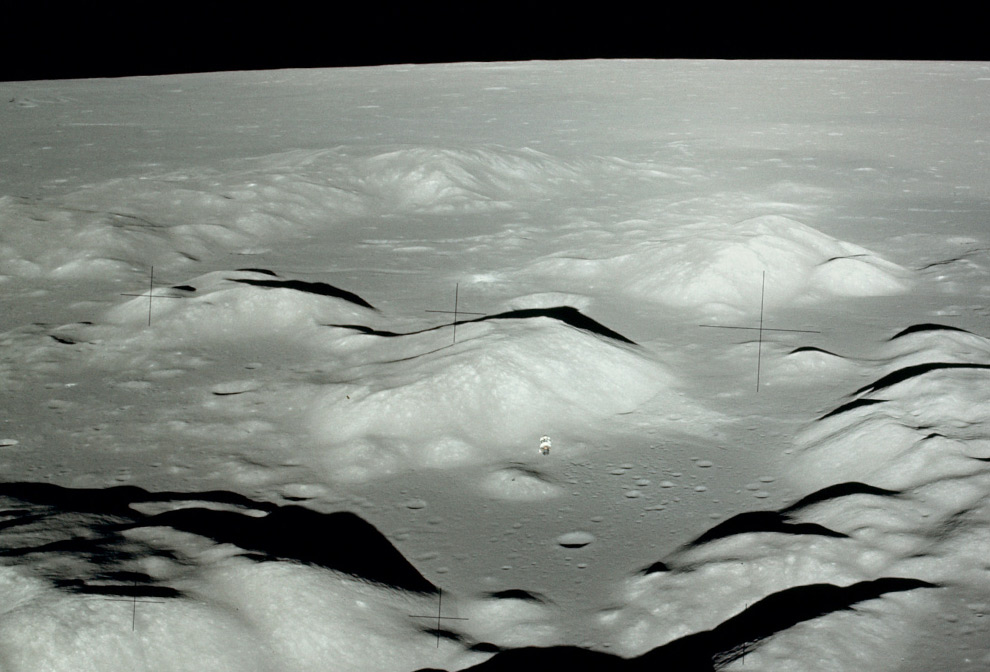 December 10, 1972 – Apollo 17. A tiny, distant Command and Service Module seen above the Taurus-Littrow landing site photographed from the Lunar Module as it descended to the Moon – the last time Men would set foot on the lunar surface. (NASA) 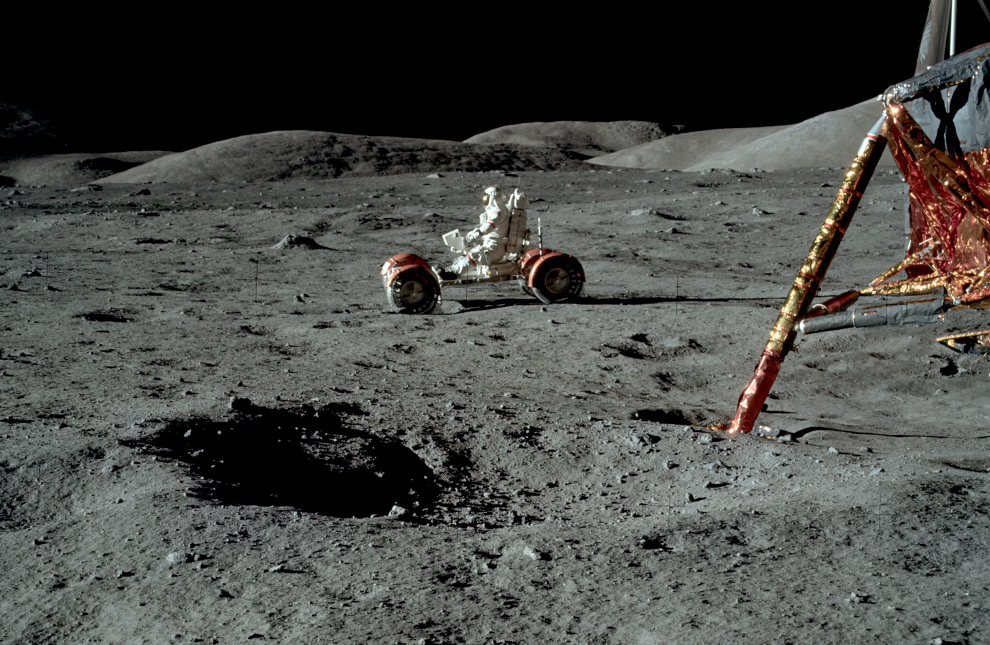 December, 1972 – Apollo 17. Astronaut Eugene Cernan drives the final Lunar Rover (of 3 total) sent to the Moon. Also seen is one leg of the Lunar Module, at right. (NASA) 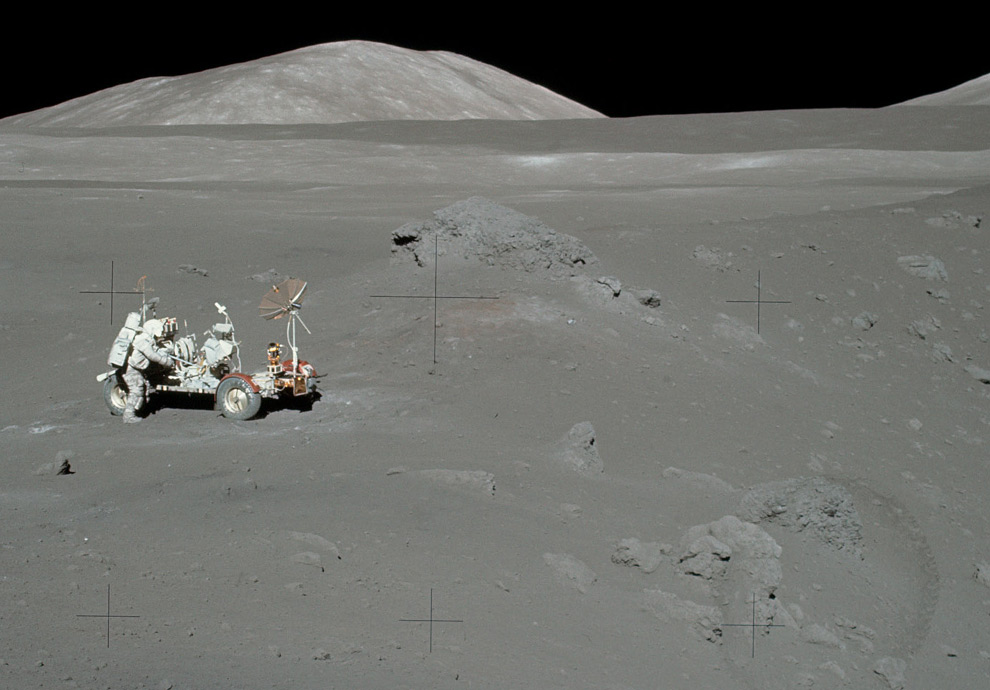 Pictured are Charles and Dotty Duke, and their sons Charles, 7, and Tom, 5. (NASA) 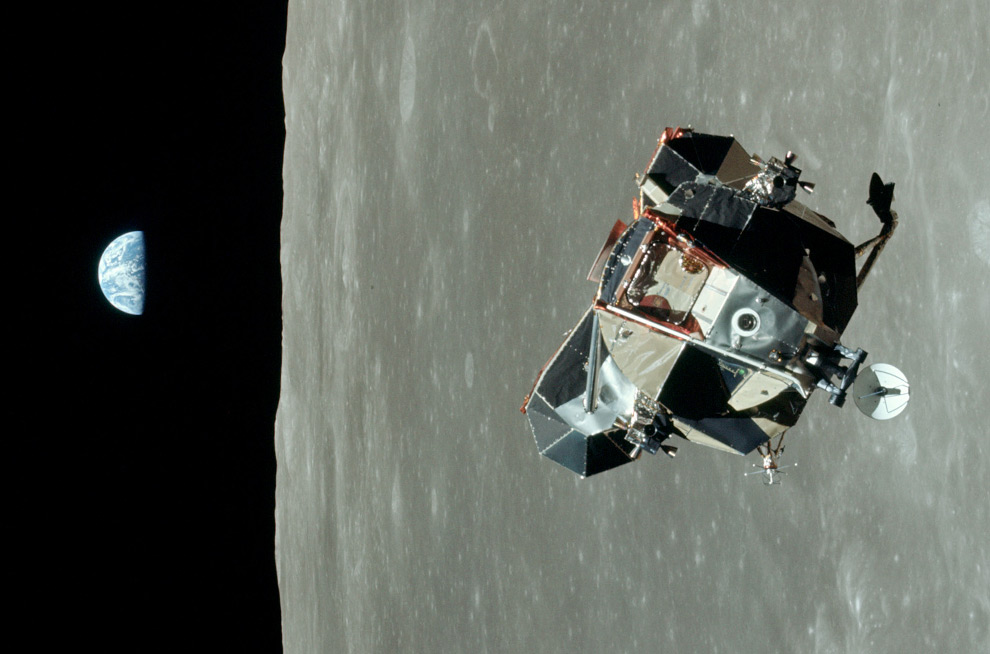 July 21, 1969 – Apollo 11. The Lunar Module approaches the Command and Service Module for docking, with earthrise in background.

Aboard the LM were astronauts Neil Armstrong and Edwin Aldrin, returning from a 21-hour stay on the Moon – the first Moon landing by Man. (NASA) 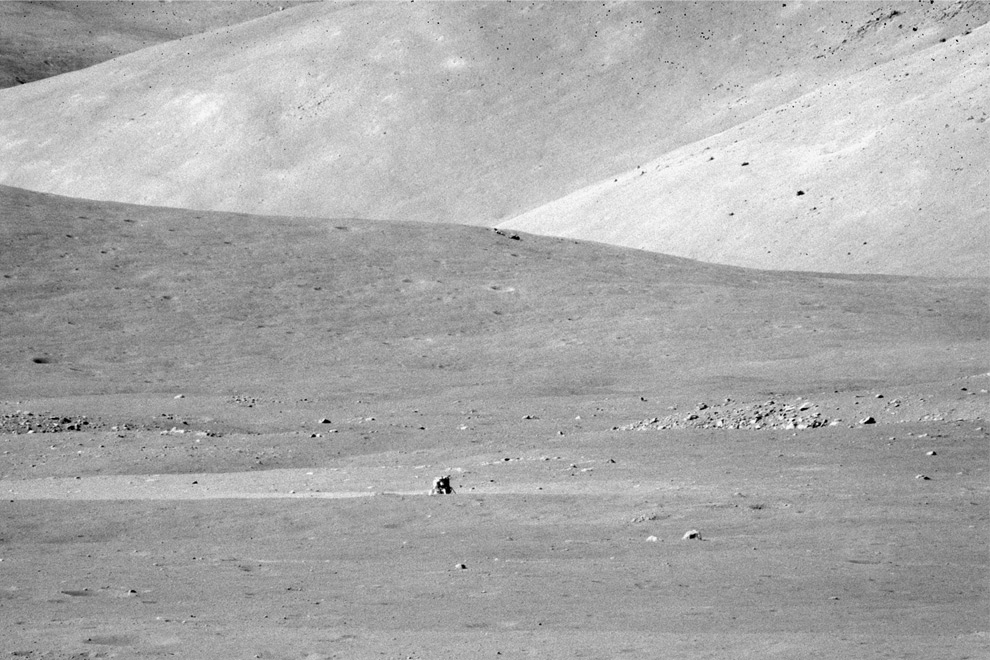 December, 1972 – Apollo 17. Astronaut Jack Schmitt took this telephoto picture of the Lunar Module, seen from a distance of about two miles (3.1 km). 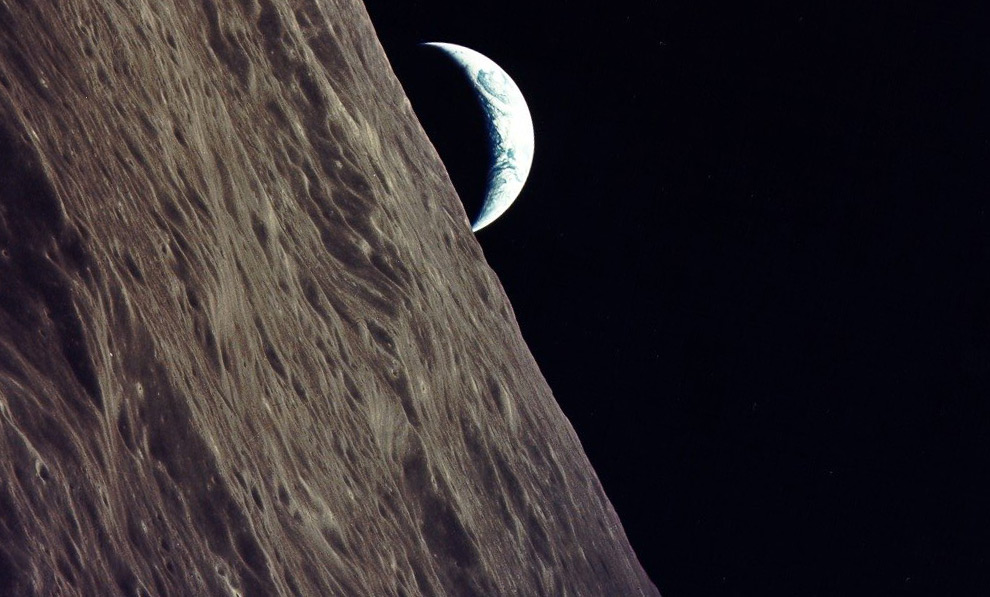