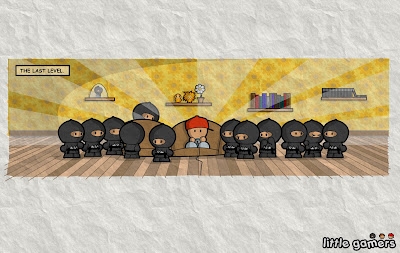 Last Level Last Supper
Little Gamers is a Swedish gaming webcomic. The characters are drawn, as described in their second comic, to be “bastard children of Hello Kitty and Bomberman.” If you had to beat 12 ninjas on the last level, you could call yourself a messiah too.

Mao Last Supper
Zhang Hongtu, an artist who studied at the Central Academy of Arts and Crafts in China before going into exile in the United States, has produced a replica of Da Vinci’s Last Supper, in which all the apostles not only wear Mao suits and caps but have Mao’s face.

Picnic Last Supper
From Argentine photographer Marcos López: Description: One of López’s most recognized images is Asado criollo, which is a recasting of Da Vinci’s The Last Supper. In the place of the sacred Last Supper of Jesus Christ and the Twelve Apostles, the founding event figured in the Holy Mass of the Catholic Church as a commemoration of Christ’s sacrifice for the salvation of mankind, we have the virtually sacralized ritual of the Argentine barbecue, where the blood-bathed sacrifice of edible beef is the privileged figure of Argentine communal identity. If wherever Catholics assemble they will celebrate Christ’s sacrifice for the salvation of mankind, wherever Argentines assemble they will celebrate the sacrifice of beef for the affirmation of “Argentinity.” (Thanks to Marchi for the tip)

Giraffe Last Supper
From artist Martin Missfeldt: “If Leonardo da Vinci had painted giraffes in his famous communion instead of humans, the whole scenery would be more complicated. The beautiful, cleared up Leonardo Fresko becomes by the devoured necks quite unclearly, particularly with the question, which Apostle is now which.” (Thanks to Martin Missfeldt himself for tipping me off to this!) 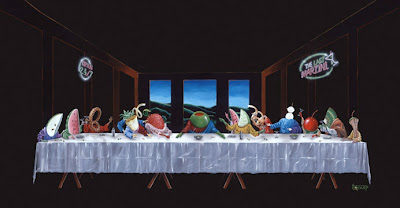 Last Martini Supper
From the “Rock Star of the Art World” Michael Godard. Description: “Stand back lighting may strike! This piece is a spoof on “The Last Supper”. Notice how Michael has added Mary Magdalene the sexy strawberry to spice up the party, the rotten apple of course is Judas and all the garnishes are ready for the last Martini Party before they are used as garnishes for our drinks. Which garnish is your favorite? Michael Godard’s personal favorite is of course the almighty Olive.” (Link)

Mel Brooks Last Supper
From a scene in History of the World: Mel Brooks is a waiter in the restaurant where the dinner takes place. Then Leonardo comes in and looks at them all sitting around the table and says he doesn’t want to paint their backs. So he tells the ones on one side to go around to the other side for the portrait’ 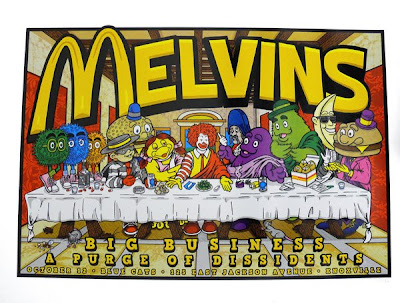 Melvins Last Supper
A concert poster advertising a show in Knoxville, TN by the Melvins, Big Business, and a showing of the film, A Purge of Dissidents. Designed by poster artist Lee Zeman, featuring McDonaldland characters as the apostles. I like the inclusion of more obscure characters Uncle O’Grimacy and Mac Tonight.

Michael Jackson Last Supper
Artist Nate Giorgio signed a deal in 1985 with Michael Jackson to do 50 paintings of him that would be used for private and commercial reasons. This version of the Last Supper hung over Jacko’s bed at Neverland. The diciples: Abraham Lincoln, John. F. Kennedy, Thomas Edison (not sure, anyone?), Albert Einstein, Michael Jackson as Christ, Walt Disney, Charlie Chaplin, Elvis Presley and Little Richard (or not, not sure of that one either).

I suppose that would make Einstein his Judas, but I doubt Jackson saw it that way. Not that I can imagine any of these people wanting to be around him anyway. Except Little Richard, who is a little bit creepy himself.

Lego Minifigs Last Supper
From Flickr member graham_wa: The disciples are the Joker, (not sure who is in the red hood), Spongebob SquarePants, Catwoman as Judas, Obi-Wan Kenobi, Chewbacca as the Christ figure, Two Face, Riddler, Michael Jackson, Harry Potter, Santa, Robin.

Update: The red hooded character is an Imperial Guard. Thanks to mauser for the tip. 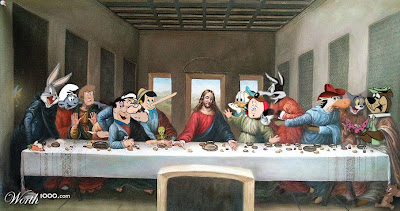 ‘Toon Last Supper
A motley mix of ‘toons, from Warner Bros., Hanna-Barbera and Disney populate this Last Supper by aards2 from Worth1000. He solves the Jesus dilemma by only makeing the disciples cartoon characters.

The Super Smash Brothers Last Supper
All characters from the game Super Smash Brothers. I have demonstrated my lack of video-game knowledge earlier, so if anyone wants to take a stab at a full-table description, have at it. But I do see the artist has followed other video game versions and placed Mario as the Christ figure and Donkey Kong as his Judas. It does make sense.

Paradise Now Last Supper
In a scene from Paradise Now, about two West Bank friends chosen to be suicide bombers, the bombers share their last meal with 11 of their associates, in an obvious homage to Leonardo Da Vinci’s The Last Supper. Of all the Last Suppers this is one of the most provocative, given the subject matter and location. 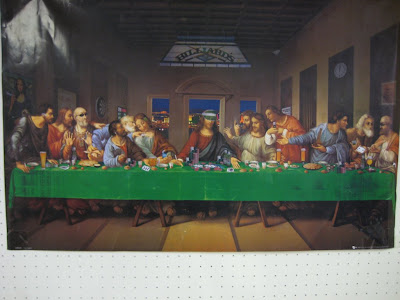 Poker Last Supper
Can’t find any info on who made this or why. I’m sure it was just made as a poster to annoy people with by showing Jesus and his disciples gambling. Meh, try harder. 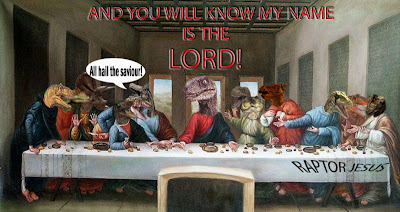 Mortein: Last supper
Description: In the ad, the faces of Jesus and his apostles have been replaced with those of the unpleasant rodent. The message is clear: it’ll be the rats’ last supper since their dinner has been seasoned with Mortein, a Chilean rat poison. (Thanks to kitchendon for the tip)

Rock Icons Last Supper
Artist Paul Karslake paints for the Rolling Stones and uses them as subjects as well, so it wasn’t a surprise to see Mick Jagger as Christ. The rest weren’t all as easy to determine. Guesses anyone? Left to right: Bob Marley, ??, John Lennon, Elvis as Judas, Jimi Hendrix, Charlie Watts, Mick Jagger as Christ, Keith Richards, ?? Bo Diddly?, Janis Joplin, Ronnie Wood, ??, someone passed out under the table, Bob Dylan 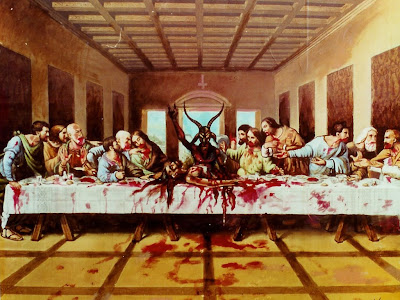 Schoolgirl Last Supper
From ArtZine: “Sanjie, by Beijing artist/photograper Cui Xiuwen, which was inspired by The Last Supper of Leonardo Da Vinci, wherein she replaced each of the apostles with the same character reappearing in the latest body of works.” 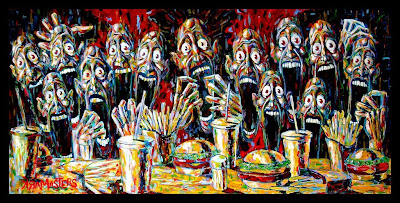 Scream Last Supper
The horror! Is it the fast food available to them at the Last Supper that is making them all do an Edvard Munch Scream? Artist deviantART member Arum1966 doesn’t say. 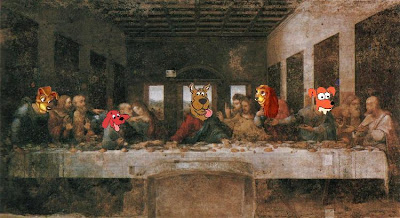 Scooby Last Supper
From a Fark photoshop contest to put dogs into Da Vinci paintings, with Scooby-Do as the Christ figure, with Lady, the Tramp, Clifford and Oddie (sp?) around the table. Now why would Clifford be his Judas? If anyone, it should be Scrappy-Do. You just know he’s sell you out.
Update: It’s not Odie, it’s Santa’s Little Helper. My bad. Thanks, moonfall86.

Shameless Last Supper
From the BBC: A billboard advert for a TV comedy depicting The Last Supper with a drunken dad as Jesus, has outraged a south-east London vicar. The poster promoting Channel 4′s Christmas episode of Shameless has been put up in front of St Olav’s Church in Rotherhithe. Father Helge Pettersson said it was outrageous and insensitive.

A programme publicist said the intention was to produce a comic contrast, not to offend. The Advertising Standards Authority said it has received 57 complaints about the poster.

The advert features 12 members of the dysfunctional Gallagher family seated around the dinner table for a drunken Christmas meal – resembling Leonardo da Vinci’s The Last Supper. In the centre is head of the family, dad, Frank wearing a tinsel crown with lager can and cigarette in hand. (Thanks to Auz for the tip)

South Park Last Supper
A scene from the episode Margaritaville with Kyle, the Jew, as Jesus and Cartman as his Judas It’s a perfect match.

From Wikipedia: Kyle and his friends go out for pizza at Whistlin’ Willy’s and laments that he feels they won’t be able to get together like this anymore because he thinks he is going to be killed. He says he worries that one of his friends will betray him. All of them act shocked while Cartman stands up and says that whoever betrays Kyle “is a dick” and “it’s not cool!” Kyle admits to his friends while glaring accusingly at Cartman that he knows what he has to do to save everyone. 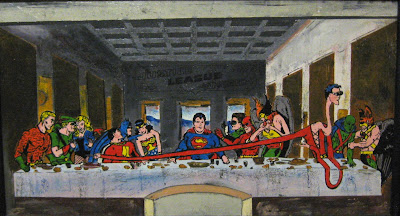 The Last Superhero Supper
This version, done by Don Wilkinson, was the inspiration for Last Suppers impressive collection of L’Ultima Cena.

Update: My mystery ?? figure is Black Canary. Thanks to mauser for the info. 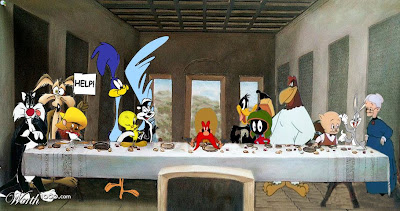 Underwater Last Supper
Description: “Fashion and international photographer Howard Schatz has the photographic table set again. The Last Supper is a marquee underwater photograph” (Thanks to PhotoJoe for the tip)

Andy Warhol’s Last Supper
Description: “Works like Last Supper (Dove) bring together brand name products from the supermarket and the sacramental imagery of the church, asserting that modern life and faith are neither separate nor contradictory. Each makes the other more real and meaningful. The dove, descending from above Christ like a halo, represents the Holy Spirit; the General Electric sign (with its own halo) is a symbol of the Son. It doesn’t take much imagination to connect GE with the light of the world, but there is an even subtler meaning to this sign: GE’s slogan, “We bring good things to life,” points to the resurrection and eternal life.”

Or, you know, whatever.

In the opening credits of the Watchmen, accompanied by Bob Dylan’s song The Times, They Are A ‘Changin’, the credit sequence shows a brief history of masked heroes.

The scene that stood out for me was the party for Sally Jupiter’s retirement from The Minutemen, which is based on Leonardo da Vinci’s The Last Supper. I love that this homage/parody has once again risen in current pop culture. 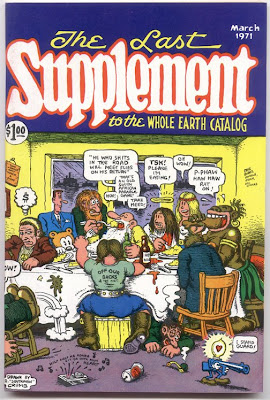 lastsupper_yomama
Description: “Renée Cox’s Yo Mama’s Last Supper is made up of five large color photographs show a naked black woman (the artist’s self-portrait), with her arms raised to heaven, with the twelve disciples, all black, seated behind a long table and so upset New York mayor Rudy Giuliani at the time that he called for a “decency commission” to monitor the morals the Brooklyn Museum of Art.” 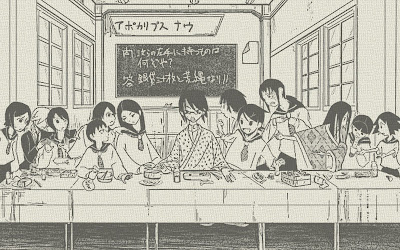